To stop dangerous space debris, the U.S. government must work together with private companies and international partners. 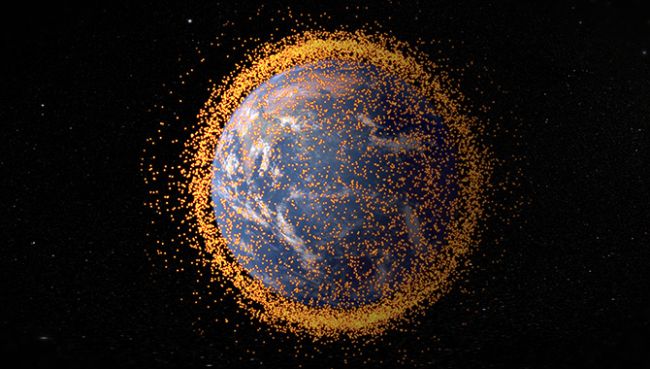 The ever-growing number of satellites and orbital debris in space prompted calls for change at a House hearing, although how this will be legislated is still under consideration.

At issue is the rise of privately owned satellite constellations by companies such as SpaceX and OneWeb. Satellites today are smaller and more affordable than the big machines of past decades, thanks to advancements in technology. But with fleets of small satellites comes other risks, such as more chances for them to slam into each other. And high-profile near misses are starting to become more common.

“This is one of the most important and rapidly evolving issues facing our ability to operate in space,” said Kendra Horn, D-Okla., chair of the House Subcommittee on Space and Aeronautics, in her opening statement at the hearing in Washington, on Feb. 11.

Two large, defunct and uncontrollable satellites nearly collided in orbit two weeks ago, passing about 60 feet (18 meters) from each other — narrowly avoiding a collision that could have sent thousands of pieces of “space junk” into low Earth orbit. And in late 2019, the European Space Agency had to redirect one of its satellites to reduce the risk of a collision; the other satellite operator, SpaceX, did not respond to requests to move its own machine out of the way.

This doesn’t even mention the numerous confirmed examples of space collisions and space junk over the decades that in some cases, are still causing problems today. For example, the International Space Station has changed its orbit in the past to dodge dangerous space debris. Space assets such as weather satellites, telecommunications links and the GPS navigation system for the United States are among the vital links of space infrastructure that could be knocked out if collisions continue.

The U.S. Department of Defense has a catalog of more than 20,000 known space objects, Horn said, although this number has a couple of limitations. The catalog only represents unclassified satellites or objects, and it also indicates the number of trackable objects. There are some things in space that are just too small to be tracked with current technology.

“Space is going to get more crowded,” Horn said, as thousands of new objects join what’s already in space. The SpaceX Starlink constellation could have more than 12,000 satellites alone in a few years, and (besides the collision concern) it already is raising concerns from astronomers for its bright objects blocking night-sky observations.

The House subcommittee commissioned a few experts to speak on how lawmakers can address this problem, under a provision in the 2020 NASA budget to carry out research and development activities concerning space debris mitigation, and to consider a strategy for space situational awareness research and technology.

The solutions proposed were diverse, but for the most part, the experts said it will likely involve using several government entities that could include NASA, the Department of Commerce and other possibilities. There may be some private industry involvement as well.

Babin suggested that the Department of Commerce could form a partnership with the private sector. It already has experience with regulating standards such as export controls, he said. It also already gives a “light touch” to emerging industries, he pointed out — such as its careful relationship in the 1990s with the Internet Corporation for Assigned Names and Numbers (ICANN) that assigns internet addresses, among many other functions.

Brian Weeden, the Secure World Foundation’s director of program planning, testified as a witness for the subcommittee. He said alerts are already coming from private industry nonetheless. It was LeoLabs, a private American company, that first sent out the alert about the possible 2020 collision in a tweet three days before the event, he said — based on ground-based tracking radars. But he warned the current infrastructure is “dangerously insufficient to face the growing number of space challenges.”

But Commerce is not the only federal entity that could step up to help solve the space junk crisis.

Much of space law rests on precedent, taking into account how things are done in international waters or on the continent of Antarctica (where multiple countries have jurisdiction). For that reason, scholar Ruth Stilwell called for considering the “high seas” as one area where space policymakers could turn for legislation. (Stilwell is an adjunct professor at Norwich University and a senior non-resident scholar at the Space Policy Institute of George Washington University.)

Stilwell called for an “international agreement on standards and behaviors,” with a transition to new space traffic management taking into account the needs of various space players. Whatever the framework is, however, it would need government oversight of some sort. “You can only be a good actor with rules to follow,” Stilwell added later in the hearing. “You can’t expect somebody to be a good actor if rules do not exist.”

There is also concern that by handing space traffic control to big entities like Commerce and a few private companies, other voices (such as smaller companies) could be lost in the space world. “We need to ensure the expertise developed in small communities is not lost in the transition phase,” Danielle Wood, the director of the space-enabled research group at the Massachusetts Institute of Technology, said at the hearing.

While NASA does have expertise in the space domain, the agency doesn’t have all the expertise that other ones have — which is why Joanne Gabrynowicz, professor emeritus of space law at the University of Mississippi Law Center, called for an interagency solution. “There is no one agency who has it all,” Gabrynowicz said at the hearing, referring to other government agency possibilities for managing space traffic.

NASA also has numerous other things to think about, Weeden said in a separate piece of testimony — including its mandate to land astronauts on the moon by 2024 and then move on to Mars. “NASA could do it, but my sense is they will be overwhelmed by all the other things,” Weeden said.

If people don’t act quickly, there is the risk that space debris could lock out the possibility of future missions for a while, if a collision creates pieces of debris that slam into other satellites and break them up, too. (This is known as the Kessler Syndrome.)

Over time the collisions would stabilize, noted Daniel Oltrogge, who is founder and administrator of the Space Safety Coalition, but the effects would still be felt. “By the time it does [stabilize], you have a huge number of small particles out there, and some fragments … that are quite large,” said Oltrogge, who is also chair of the space traffic management space governance task force for the American Institute of Aeronautics and Astronautics.

More subcommittee hearings will be coming up to discuss what to do next.

Space Debris Removal: Learning to Cooperate and the Price of Anarchy

How Mega-Constellations Lead to Increased Sustainability Risks in Outer Space